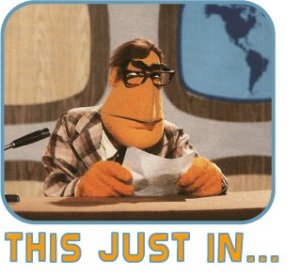 Ed note: This post was going to be about Proust, and wound up being about eggplant, and for that I am very, truly sorry.

Fall in California can be infuriating.  Now, I’m going to admit right up front that me blogging about the heat and general pleasantness of weather in California one week after the storm of the century on the east coast makes me…kind of an asshole.  So, yeah, I’m an asshole, but hear me out.  The problem is the inconsistency – it was lovely here on Friday, overcast in the morning, sunny in the afternoon with a high of 71.  Today it’s 92.  I hate when it’s this hot, it’s uncomfortable and I have already put my summer clothes away, so I’m wearing a sweater and I look like a rube.  Also, it’s killing my allergies, so there (legitimate gripe).

Anyway, yesterday I wanted to cook.  I love to cook, and I’m always looking for something interesting to make.  Lately I’ve been trying to get into eggplant.  It’s one of those things that we never had to eat as a kid because my mom hates it so, just like brussel sprouts and mushrooms, I really don’t know much about it.  But here’s the thing… I LOVE brussel sprouts and mushrooms, I just didn’t know it until I was an adult, so I’m trying to give eggplant a whirl too.  So far, I’m not that impressed, but here’s what I made. 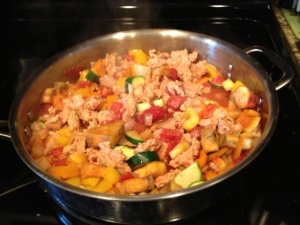 It’s a bunch of fresh vegetables and bulk spicy chicken sausage, and it was pretty good!  So, I enjoy cooking, and love dishes that are hearty and fall-like but when it is 90 degrees I have to turn on the a/c to eat it.  I had it with pasta, which wasn’t quite right, so maybe I will try it with rice for dinner.  No matter what I cook, I usually wind up eating it as a burrito, which I did just moments ago for lunch.  And thus ends the most random blog post I’ve ever done.