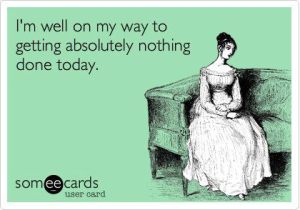 It’s one of those days… the ruminating days. The days I have to remind myself that I’m better off now than a year ago. A day that I remember specifically as very difficult, a day where I felt alone and suspicious and rejected. A day that I can easily pass in piteous self recrimination, only I really can’t because I have so much homework to do. This class is really going to be something – last week was a big old fake out, all “let’s get to know each other!” and “anything you write will be great!”; now the truth comes out, and “ten pages are due by Tuesday!”

On the upside, the hotels in Spain are finally booked. God knows what they are going to be like, but I’m relying heavily on the good people commenting on Trip Advisor and Priceline – which, when you think about it, isn’t such a great idea. But alas, we will probably manage to have fun even in a hovel.

I now have 3 Barre classes under my belt, and I can proudly say that I only felt like fainting one time in yesterday’s class. That is a pretty big improvement. I am starting to like it, just like my friends told me I would. I really hate to admit that but it’s true, and that possibly I will live to regret throwing accusations that their pants were on fire, but not quite yet.

Yesterday Christine and I tried this amazing new Indian restaurant and as we had lunch I casually mentioned that the lease on my car is up soon and I had to think about what I wanted to do. She immediately perked up and started firing questions at me, I could see her mentally making excel spreadsheets and cross referencing this month’s Consumer Reports, which I happen to know is on her coffee table right now. This is where it really pays to have friends that are different than you, because I would rather go to a Justin Bieber concert than analyze car features, but this is like Christmas morning for Christine. I told her that I was thinking about a certain car, and that I would probably just email the guy and figure it out and she almost knocked over her iced tea “ARE YOU SAYING YOU HAVE NOT TEST DRIVEN IT?” she might have screamed. “Nah, it’s probably fine” I replied, because test driving a car would involve speaking to another human being, which really isn’t my thing (for instance, I went to three different places today to find a Redbox to return a DVD because I didn’t want to walk by girl scouts and say no thanks) and she immediately called for the check so we could spend the afternoon looking at cars. She did all the talking, most of the research, and has since sent me all the ratings of the cars we discussed, and I love her very much…