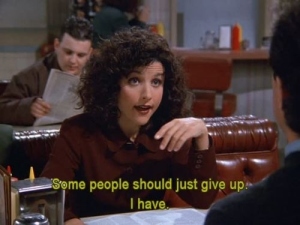 Updates for a Monday afternoon…

1. Yesterday I got almost ten minutes into a conversation about how Iron Man and Batman are really similar, except that Iron Man is happy and Batman is an angry, sad person (Dark Knight, duh), before I realized that no one wanted to have that conversation except me. Unsurprisingly, I did not stop talking because interesting.

2. Some people I know get really specific and irritable about the entire concept of saving daylight. You know who you are.

3. Either I’m getting worse at my job, or my job is getting a lot worse, but either way… it isn’t great.

4. I really have to stay off my blog analytics – they just piss me off. While it’s super interesting that someone typed “homeland Jessica’s negligee” or “meaning of flirting” into Google one day and that led them to my blog, the rest isn’t really helpful. Part of, you know, putting all your shit out there for people to see, is not obsessing about WHO (whom?) (who, right?) reads it. So, if people who have otherwise proven that they don’t want you around then hang out reading about the ridiculous minutia of your life? Well, that’s confusing. But it’s not any more meaningful than that, so it will not do to read anything into it. Also, I’m only looking at it so I can avoid other stuff, which causes more stress, not helpful.

5. People from Norway do not like to be called Swedish. Repeatedly. Just for fun. When you know they are Norwegian. In Scandinavia, this is not considered flirting. Weird.